Amanita Muscaria is unquestionably one of the most iconic mushrooms in the world, rooted in history and folklore across cultures. In the most modern example, the amanita muscaria’s white-spotted, red cap is seemingly the inspiration for the magical Power-up mushroom in the Mario Brothers series of games. Ironically, the Fly Agaric, as it is also called, is actually not a mushroom, but a toadstool.  Amanita muscaria grows in many parts of the world, including North America, India, New Zealand, Central America, the Mediterranean, Scandinavia and Eastern Europe. Such a wide distribution across so many cultures is why there is such a storied past for this attractive creation of nature.  It  is not hard to imagine why primitive humans would want to investigate something so bright and so unique standing out in the backdrop of the forest’s green and brown. And by appealing on such a basic level, the amanita mushroom’s relationship to humans goes back very far in history.

Most mushroom guides list Amanita Muscaria as a poisonous mushroom.  It does contain the neurotoxin, ibotenic acid.  Interestingly, though, when dried between 170-220 degrees Fahrenheit, ibotenic acid does convert to muscimol, the other primary compound found in the mushroom caps. Ingestion of amanita can result in sickness, but cases of fatal ingestion of amanita muscaria are extremely rare.  A few fatal cases have been the result of misidentification or accidental ingestion by small children.  Amanita muscaria is in the same genus as the terrifying Death Cap (Amanita Pahlloides), which kills its victims over a few days by essentially destroying and disabling the liver.  But these two mushrooms are very easily distinguished, and it would be almost impossible to mistake the two species. It goes to show that just because two things are scientifically related, that does not imply that they are pharmacologically similar. Amanita muscaria is generally easily distinguished from most other amanitas by it’s unique features, although, especially at certain stages, amanita muscaria can be mistook for a few other species in eastern North America such as amanita flavoconia, flavorubescens, parcivolvata or frostiana.

Despite what might be considered a poisonous reaction, it has not prevented a long history of spiritual connection by various cultures across the world. The Shamans of Siberia, consider the Fly Agaric mushroom an important spiritual aid.   Entheogen researcher and botanist, Gordon Wasson, even proposed the possibility that the Fly Agaric was the Soma that the Rig Vedas of India  wrote about.  Even the Vikings are believed to have used the Fly Agaric mushroom in ritualistic practices to overcome fear prior to battle. Their “berserker” warrior state was a frenzied state of aggression that helped them dominate their enemies. from this, we get the term, “going Berzerk”.

Some sources even claim that low doses of amanita muscaria have health benefits just as other medicinal mushrooms do. For those familiar with homeopathy, it is not a foreign concept to think that something that can be considered toxic can also help detoxify or help the body.  It has been said that it could support the immune system.  Some believe that micro-dosing amanitas can help detoxify the body. Amanitas in low doses or as a topical application are used by some people to help pain and reduce inflammation.  Anything that can reduce inflammation has the possibility of providing all sorts of benefit to the body since inflammation seems to be the root cause of many problems in the body.  If that was true, then it would explain those who say it helps with arthritis, muscle pain and joint aches.  This type of use is by no means widespread, and there does not seem to be much, if any, formal research in this area. But it is an interesting concept to think about, and it is not as far-fetched as it might seem at first when you make other considerations regarding plant and mushroom medicines.  But practically speaking, the other compounds in the mushroom make anything outside of academic exploration of this concept an ill-advised gamble.

Amanita muscaria is a favorite food of reindeer, who can safely eat the mushrooms.  But this has led to the notion that Santa’s flying reindeer were inspired by their affinity for the mushroom. This seems to explain why the amanita muscaria mushroom is a traditional element of Christmas decor, especially in Scandanavian cultures where Santa Claus himself is said to have originated.  Red, the color of the Fly Agaric cap, is probably the most associated color of Christmas (with green as second). Red is the color of Santa’s outfit. The amanita mushroom is often pictured together with gnomes, another mystical symbol.  A variation of the gnome concept, we come to know of Santa having elves who help him complete his magical tasks. Perhaps purely coincidental, it is interesting to note that amanita muscaria has a symbiotic relationship in nature with pine trees. It can only grow where pines are nearby.  So it is coincidental that pine trees themselves are another symbol of Christmas.  Who ever thought Christmas was so rooted in the symbolism of a shamanic spiritual aid?

As it is dependent upon the relationship with pine trees, at the present time, it is still impossible to cultivate amanita muscaria.  All dried specimens in the world have been collected from the wild. We offer specimens that have been collected and heat dried.  These specimens were collected in Latvia (Eastern Europe). The mushrooms from this part of the world are typically more orange.

We offer these for ornamental and craft use or as research/ botanical reference samples,  STRICTLY NOT FOR CONSUMPTION. 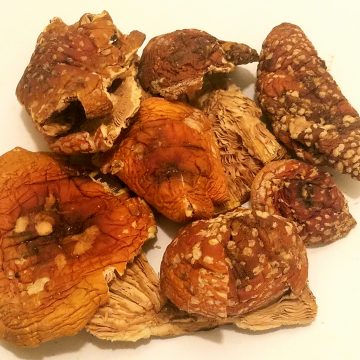