Agave Parryi, also known as Parry’s Agave or Mescal Agave, is a succulent, evergreen plant, which develop into nicely rounded rosettes. The leaves are usually hazel green and are pointy at the top. The plants look like artichokes, and they can grow to several feet in diameter. Over many years, the plant builds up and stores sugars to use for flowering. During the adult stage, they grow 12-foot stalks with yellow flowers from the middle of the rosettes. The stored sugars in the plant also produce nectar to attract insects to help pollinate the plant, which is very important given that the plant only gets one chance to produce seeds. .With all of its energy spent on reproduction, the plant’s life cycle is completed after flowering, and the plant dies back. The sugars stored in the agave heart once made an important food and energy source for Native Americans. They removed the leaves, and roasted the agave hearts, also known as pinas, for four days. While the agave roast was going on, they tended to chew on the removed agave leaves to extract any extra nutrients they could. The abundant sugars in the plant have also made agave parryi a traditional candidate for making the alcohol known as mescal. Today, agave syrup, which is a bit like honey, is still somewhat popular too. Succulent plants, like Agave Parryi, are also commonly known as Fat Plants. They are mostly grown in very arid climates, such as Arizona, New Mexico, and Mexico or in the Tropics. Known to tolerate cool mountain weather, this species is very hardy and can be grown outdoors to Zone 5b but does prefer a dry winter.

Growing information: Agave Parryi can be grown in the house as well as in warm green houses. It needs at least a few hours of sunlight per day, however full exposure is not recommended. Sow your seeds with the edge down so that the top edge is about equal with the soil line. Burying too deep will ruin germination. A commercial cactus soil mix is ideal for growing agave. We have also had success with a mix of compost and sand. Keep the seeds lightly moist until they sprout. If the temperature outside reaches above 58-60 degrees consistently, the plant can be moved outside, however a careful watch is suggested. The soil should be fertilized every 15-20 days with a low—nitrogen fertilizer. Agave does not requires excessive watering. As a succulent, agave can hold water inside it leaves, stems, and roots. The soil should actually dry between watering periods. A deep watering about once per month is suitable for established plants. Small plants should be watered about once every week though. In the winter, watering should be even less.

International buyers must assume risk of arrival on all items. We cannot replace lost or seized items. You will be required to confirm that you agree to these terms before items can be sent. 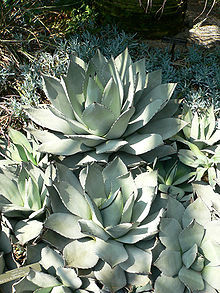